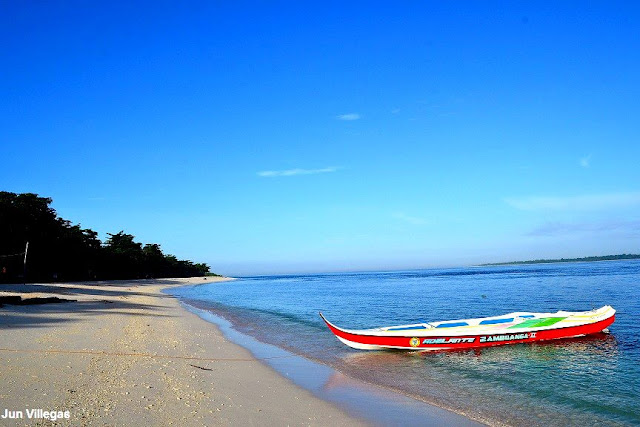 The Philippines is endowed with white sand beaches and pristine waters.
But there is one beach in the Philippines which has pink sand beach and that beach is the Sta. Cruz Island Beach in Zamboanga City. 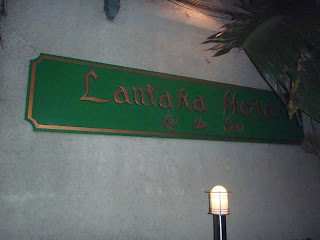 December 27, 2012. I was staying in Lantaka Hotel in Zamboanga City. I was in Mindanao for my post Christmas tour for 2012. I arrived 9 pm in Zamboanga City from Pagadian City. There were only two places that I would like to visit in Zamboanga City, Sta. Cruz Island and Fort Pilar. 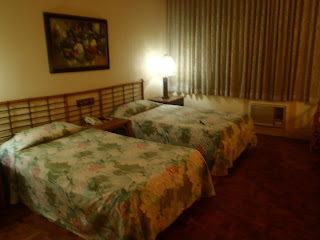 Arriving at the hotel, I took the single occupancy (roadside), the cheapest and paid using my credit card. It is not often that you can use your credit card in Mindanao. 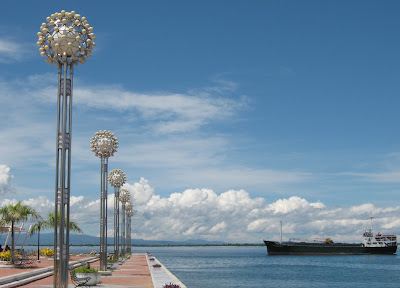 The following morning, I went to Paseo Del Mar.

From Lantaka Hotel, the walk to Paseo Del Mar is just five minutes and Paseo is just a stone's throw from my hotel. This was the primary reason why I took lodging in Lantaka Hotel (the only seaside hotel in the city).

Paseo del Mar is a 2.5-hectare leisure park located between the historical shrine of Our Lady of the Pillar and Lantaka Hotel by the Sea, the oldest hotel in this city.There are numerous things you can do in Paseo Del Mar like jogging, biking, street food eating, and nature tripping. But the number one attraction is available only Saturday and Sunday and that is riding the colorful vintas of Zamboanga City. 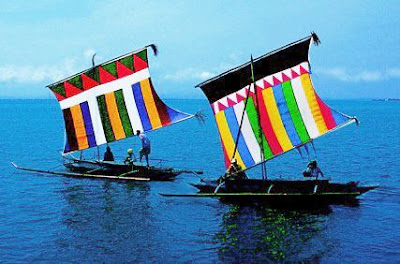 Unfortunately, it was a Thursday that day and the vinta tour on a tarts 4 pm - 6pm at an affordable cost of P50 for a 20 to 30 minutes ride around the picturesque Paseo del Mar.

Anyway, I proceeded to my destination.

And that is the berthing point of the ferry boat to Sta. Cruz Island. 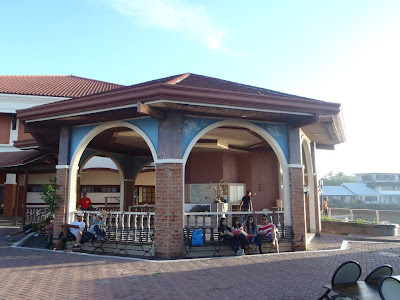 It was 6:45 am and there were already a handful of tourists at the registration area. 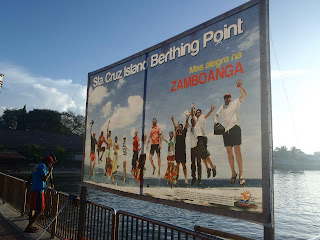 I immediately talked to the staff and I was told that the first trip leaves at 7:am. 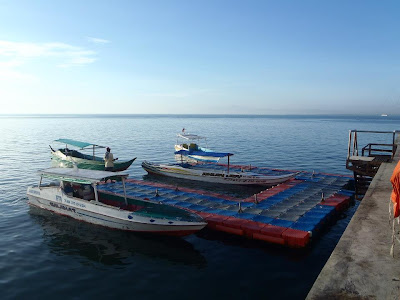 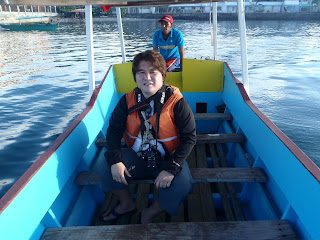 I chartered the entire boat and paid P1,000 and proceeded to Sta. Cruz Island.

The boat ride is 25-30 minutes depending on the tide.

It was a beautiful day and we arrived ahead of time. 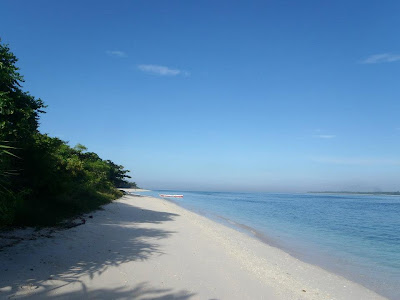 And after 20 minutes, we reached the spot.

I strolled in the beach and took pictures of the beach.

What a lovely sight it is!! 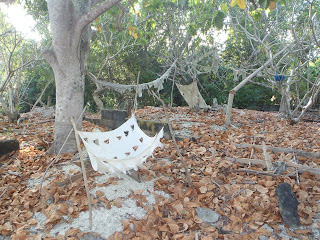 My guide brought me to the Samal cemetery which is also located in the island.

I was told that according to Samal tradition, they had to bury the deceased within 24 hours and they had to bring the corpse to this spot. Nowadays, the Samal and Badjao are no longer allowed to do their  ritual/tradition on this island. 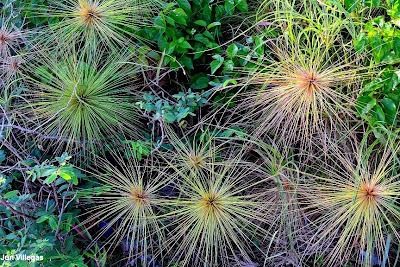 There were also these rolling grasses.

And during windy season, you can see these grasses rolling in the beach. 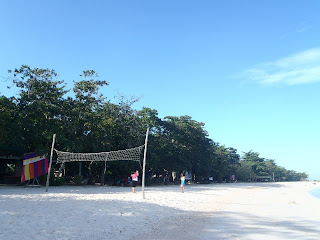 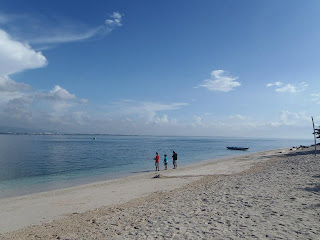 After thirty minutes, tourists began flocking in. There were plenty of tourists that day and some of them arrived at the beach using the navy's boat.

Some of the people were simply fishing at the beach.

I continued exploring the island. 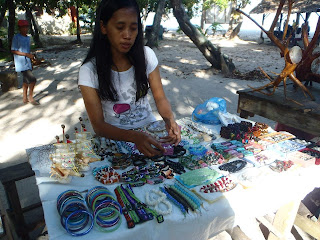 There were souvenir items sold in the island. 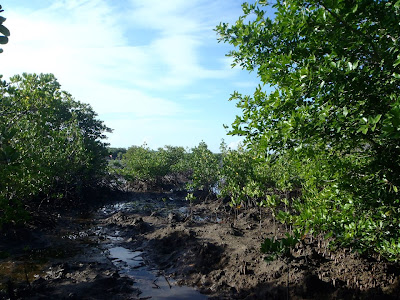 The island also has a mangrove (bawakan) plantation.

The plantation will be developed and they will be providing a bamboo bridge so that tourists could explore the mangroves. 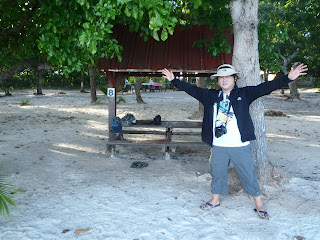 After staying for more almost two hours at the island. I decided to leave and go to my next destination. 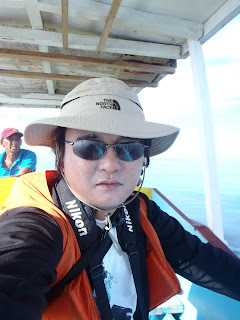 And I boarded the anew and went back to the berthing  point.

Another 25 minutes for the boat ride.

From the berthing point, I walked for another five minutes and reached my second destination. 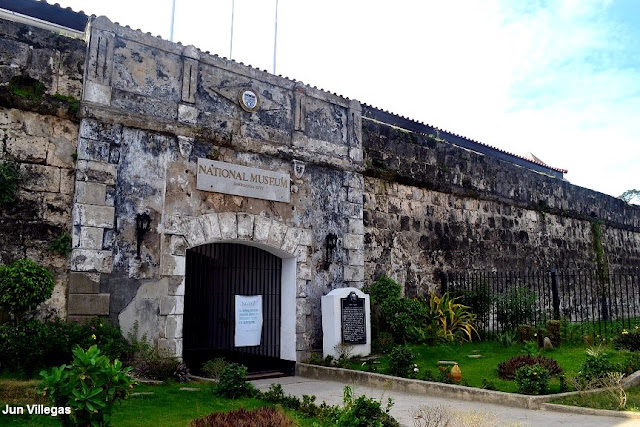 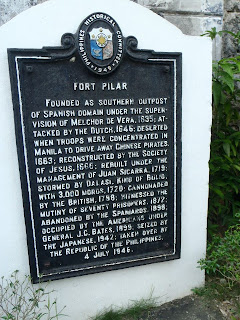 The fort was under renovation and initially, the security guard did not give access inside the fort.

I tried my best to persuade him to allow me since I was a tourist from Manila.

The guard told me to talk to the manager and after then minutes, I was inside the fort. 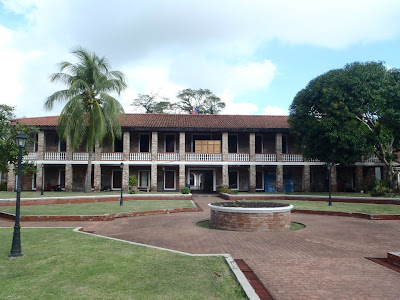 Fort Pilar is one fort rich in Philippine history.

I was told that the Queen of Spain took her lunch this year (2012) at this fort. 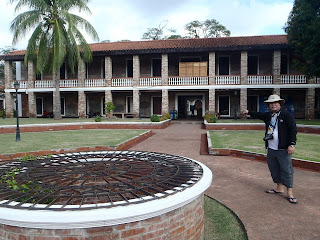 It was the second day of my tour and I still had to go to Lake Sebu in South Cotabato.

Place to Stay in Zamboanga City

Traveller's Inn
Good for short stay only, in between Medio Hotel and City Inn Hotel